The Book That Made America: How The Bible Formed Our Nation 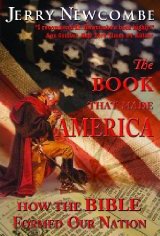 There is much debate going on about what principles the United States of America was founded. Was it founded by a bunch of capitalists who just happened to be moralists? Or, was it founded on Judeo/Christian principles that were established thousands of years earlier in the Bible? You would think this would be a no-brainer, but somehow atheists (and others)  have their own version of why there are so many references to God and the Bible in the early writings and lives of our founding fathers.

In his book, The Book That Made America: How the Bible Formed Our Nation, Jerry Newcombe sets out to prove that our nation was indeed founded on Christian principles, and it is those same principles that we’ve strayed away from.

The Book That Made America: How the Bible Formed Our Nation (Nordskog Publishing) by Jerry Newcombe is a definitive volume on the Christian roots of our nation. Those who want to restore knowledge of our Christian heritage have their work cut out. As secularism continues its stranglehold on American education, we move further and further away from retaining our Christian roots. The Book That Made America will challenge anyone to know the true origin of our Nation and to fight to keep it. Newcombe hopes to educate Americans by providing the facts of history, proving that America began as a Christian nation and American’s have every right to preserve and uphold that heritage.

All that is positive in our foundation can be traced back to the Scriptures. Recently, President Obama declared that America is not a Christian nation, while Newsweek announced the demise of Christian America. This book is the answer to America’s critics with the facts of history.

You can win a free copy. I have one copy to giveaway to someone. Leave a reply stating why you think this book would be a good read and I’ll pick one entry to send a free book to.

Jerry Newcombe, D. Min., is senior producer for Coral Ridge Ministries and has produced or coproduced more than fifty documentaries. The host of two weekly radio shows, he has also been a guest on numerous television and radio talk shows – including Fox Business News, C-Span, USA Radio and Moody Radio. He is the author or coauthor of twenty two books, including with Dr. Kennedy, What If Jesus Had Never Been Born?, How Would Jesus Vote?, and The Presence of a Hidden God.

Recently President Barak Obama, while on a trip abroad and without giving the matter sufficient thought, casually declared that the United States is not a Christian nation. If the President had been a little more analytical, and especially if he’d read the remarkable new book you now hold in your hands, in all probability he would never have made such a statement. For page after page, from the beginning to the end, The Book that Made America by the gifted and scholarly Dr. Jerry Newcombe tells us America was born a Christian nation and has been one ever since.
This book begins by exploring America’s Christian roots with the Bible as the country’s basic textbook, the Bible’s law and covenant illustrated in the lives of the Pilgrims and the Mayflower Compact, becoming our guide to individual self-government, structured constitutionalism, and a free market. If you turn all the way back to this book’s Appendix, what do you discover? The United States Supreme Court made it official: America Is a Christian Nation!
No matter what books you now own about our Christian history, I encourage you to get this one! – for an adult Sunday School or Teen Sunday School, for your pastor, or simply for your own edification. Become a more knowledgeable Christian citizen! After you learn about the significance of the Pilgrims, come visit their home in Plymouth. — CHW

Praise for The Book That Made America…

Say that America is a Christian nation and you’ll be brought up on hate crime charges – or at least thought an ignoramus. But what are the facts of history? The Book That Made America demonstrates that there once was a Book even more integral to this nation than Al Gore’s Earth in the Balance. I recommend Dr. Newcombe’s book highly!
— Ann Coulter, New York Times #1 Author

The Book That Made America is a most welcome addition to the growing literature that documents the foundational and pivotal role that the Bible played in the founding of our nation and the forming of our government. Dr. Jerry Newcombe combines accurate scholarship and careful analysis with engaging writing. This arsenal of historic wisdom from our Judeo-Christian heritage should be in your library. If you have funds to buy only one book on this topic, this is the one!
— Peter A. Lillback, Ph.D. Prof. of Historical Theology, Pres., Westminster Theological Seminary, Pres., The Providence Forum, Sr. Pastor, Proclamation Presbyterian Church, Bryn Mywr, PA

Historical revisionism is alive and well in our nation’s classrooms and in the media. So what has been the Bible’s role in American history? It certainly had a profound impact on the founding of this country as well as in the framing of the government. And where did we go astray as a nation? How can we return to our Biblical roots? Jerry Newcombe answers these and many other questions in The Book That Made America. Read this book to learn the history our nation has forgotten.
— Kerby Anderson, National Director, Probe Ministries International, Host of “Point of View,” USA Radio Network, and author of many books and articles

Jerry Newcombe has created a masterpiece of apologetics that skillfully portrays the power of Scripture in the transformation of the American wilderness into the world’s first Christian constitutional republic. His writing is profound and well documented, yet easy to read. This great book will become a timeless educational resource that catapults the centrality of Christ and His Word back to the heart of our civilization where it belongs.
— Marshall Foster, D.D. Founder and Pres., The Mayflower Institute and World History Institute, Speaker, and Coauthor of The American Covenant: The Untold Story, Thousand Oaks, CA

In The Book That Made America, Jerry Newcombe quickly cuts through the fog of agenda driven rhetoric to give a brilliant and unbiased examination of what made America unique among the nations of the world. Jerry’s commanding knowledge of history provides clear and undeniable evidence that the Bible was a key formative influence in America’s culture, economy, and form of government.
— William J. Federer Best-selling author and speaker, nationally known radio host on AmericanMinute.com, Pres., Amerisearch, Inc., St. Louis, Missouri

Jerry Newcombe has furnished Christian believers with a major weapon for the moral and spiritual civil war we are waging for the soul of America. He carefully provides us in a readable and engaging way with quotable evidence of the Christian roots of our nation. This book should be in the home of every American patriot.
— Peter J. Marshall Evangelist, speaker, and co-author of best-selling books, including The Light and the Glory, Cape Cod, MA

This entry was posted in Book Reviews, Relevant Faith. Bookmark the permalink.

3 Responses to The Book That Made America: How The Bible Formed Our Nation